Visit of the Japanese Entrepreneurs from WAOJE Kyoto

A 11-member delegation from the World Association of Overseas Japanese Entrepreneurs- Kyoto led by Sakaguchi san visited Ramaiah Institute of Management on the 6th September 2022. Ms. Anjana K.S.- Head of the Ramaiah Japan Centre (RJC) welcomed the delegation and presented a glimpse into the RJC’s initiatives. Dr. Manasa Nagabhushanam - Director (Academics, Research & Administration) spoke about the entrepreneurial ecosystem set in the Institute. As part of the interactive session, the various entrepreneurial initiatives taken up at the Institute were presented. Prof. Yashaswini Murthy and Prof. Megha B (Asst. Professors from the HRM Dept. & Coordinators of the IEV program) presented an overview of the Centre for Entrepreneurship and the two-year full time PGDM-IEV-Innovation, Entrepreneurship & Venture Development program offered by RIM. The Heads of the various Departments-Dr. Triveni (Finance), Dr. Swati Basu Ghose (Marketing), Dr. Udaya Shankar (Operations), Dr. Gururaj B Urs (Academic Head), Dr. Bhanumathi P (Academic Coordinator) and Prof. Rema V (Asst. Prof- Dept. of Business Analytics & Faculty Coordinator-RJC) were part of the interactive session. There were deliberations on various opportunities of collaborations. The delegates had an interaction with students of the RJC and also visited the Ramaiah Evolute and the Ramaiah Institute of Technology.

The Ramaiah Japan Centre- ‘Kizuna’ was formally launched on 16th March 2022. A Mini-Japan set up at the Ramaiah Institute of Management was inaugurated. The centre had displays of Origami, Ikebana, Calligraphy and Tatami Japanese style mats. This was followed by a formal Ceremony where Dr. Manasa Nagabhushanam-Director (Academics, Research & Administration) welcomed everyone and highlighted the significance of opening of this Centre to steer International collaborations.

The event concluded with the vote of thanks by Dr.V.Padmaja, Associate Professor-HoD- Dept. of HRM & Gen. Management. The event witnessed participation from Heads of Institutions of the Ramaiah Group, faculty and students of the Ramaiah Group campus. The session was streamed live on YouTube. Prof. Rema V- Asst. Professor, Dept. of Business Analytics was the Emcee for the event.

Ramaiah Japan Center (RJC) is happy to announce that the Second batch of the Basic Japanese Course starts from February 2021.

Please do fill the attached google form for enquiries.
https://forms.gle/U1bd7QycqD7xHPkX6

For any queries, email rjc@msrim.org

The Ramaiah Japan Centre (RJC) conducted its 1st Cultural Workshop on Origami on 24th December, 2021 from 3:00 to 5:00 PM. Origami art is the traditional Japanese craft of folding a sheet of paper into objects and figures. Ori translates as “folded,” and kami means “paper.” Traditional origami consists of folding a single sheet of square paper (often with a coloured side) into a sculpture without cutting, gluing, taping, or even marking it. Mrs. Geetha Bhat, an Origami expert was the resource person for the event. Ms. Anjana K.S., the Head of the Ramaiah Japan Centre introduced the resource person and gave the participants an overview of the courses offered by the RJC. The workshop witnessed an overwhelming participation with over 70 participants including students and faculty members from the Group Institutions- Ramaiah Polytechnic, Ramaiah Institute of Technology, College of Education, Ramaiah College of Law, Ramaiah Pre University College among others. The event was well received and saw enthusiastic participation from the audience. The students from the first batch of Japanese course supported in the conduct of the event. The event concluded with a vote of thanks by Prof. Rema V. 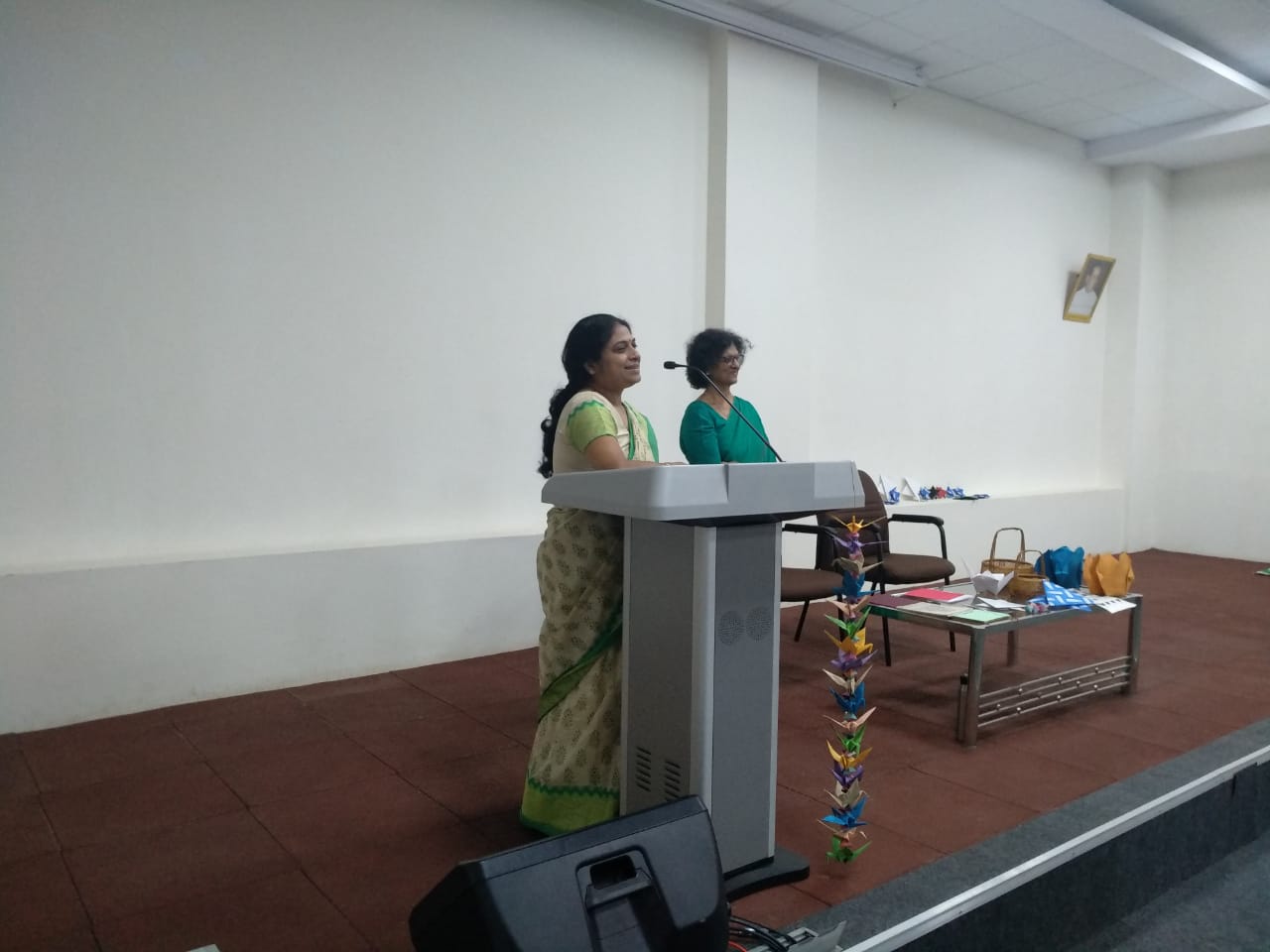 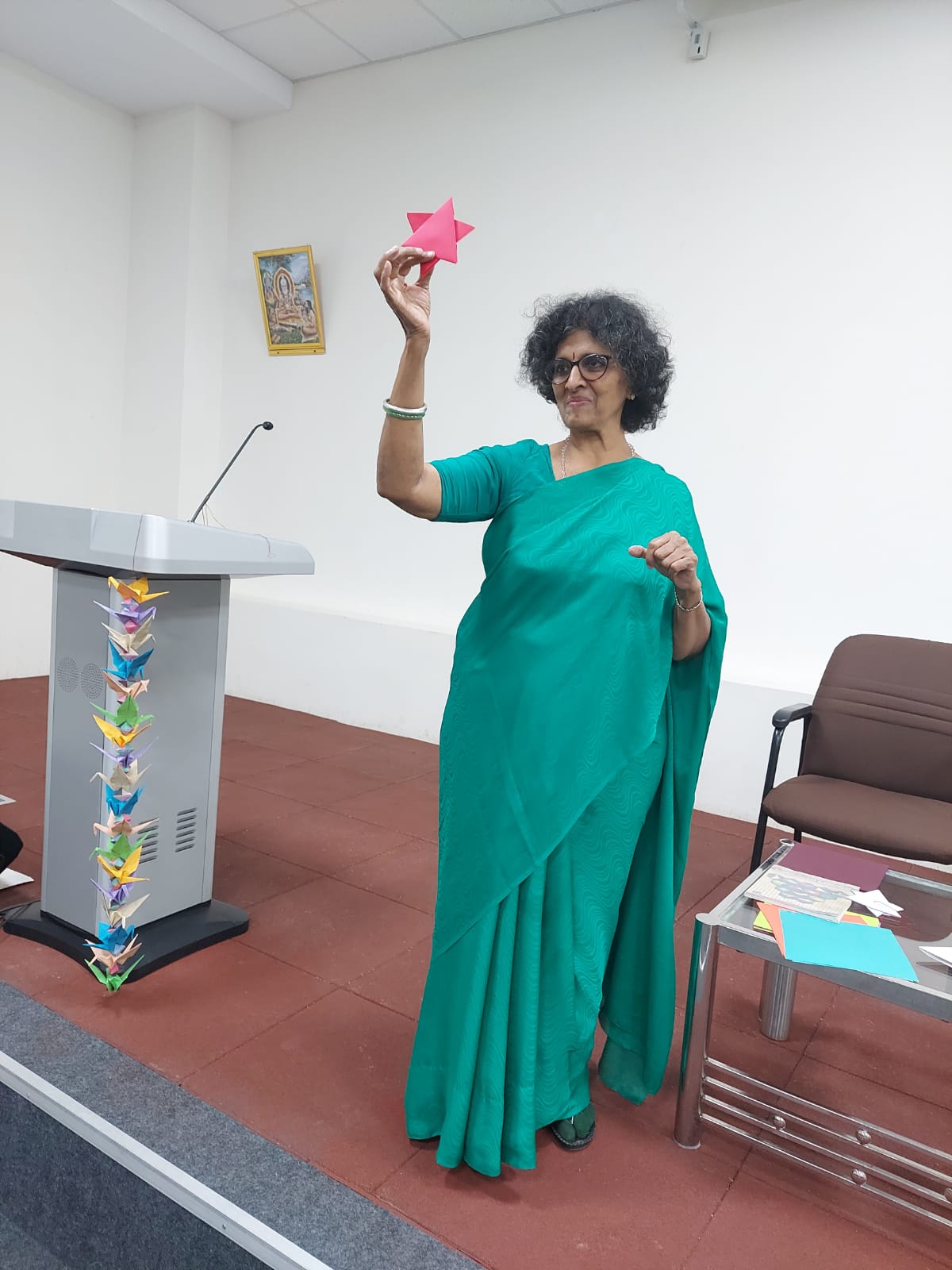 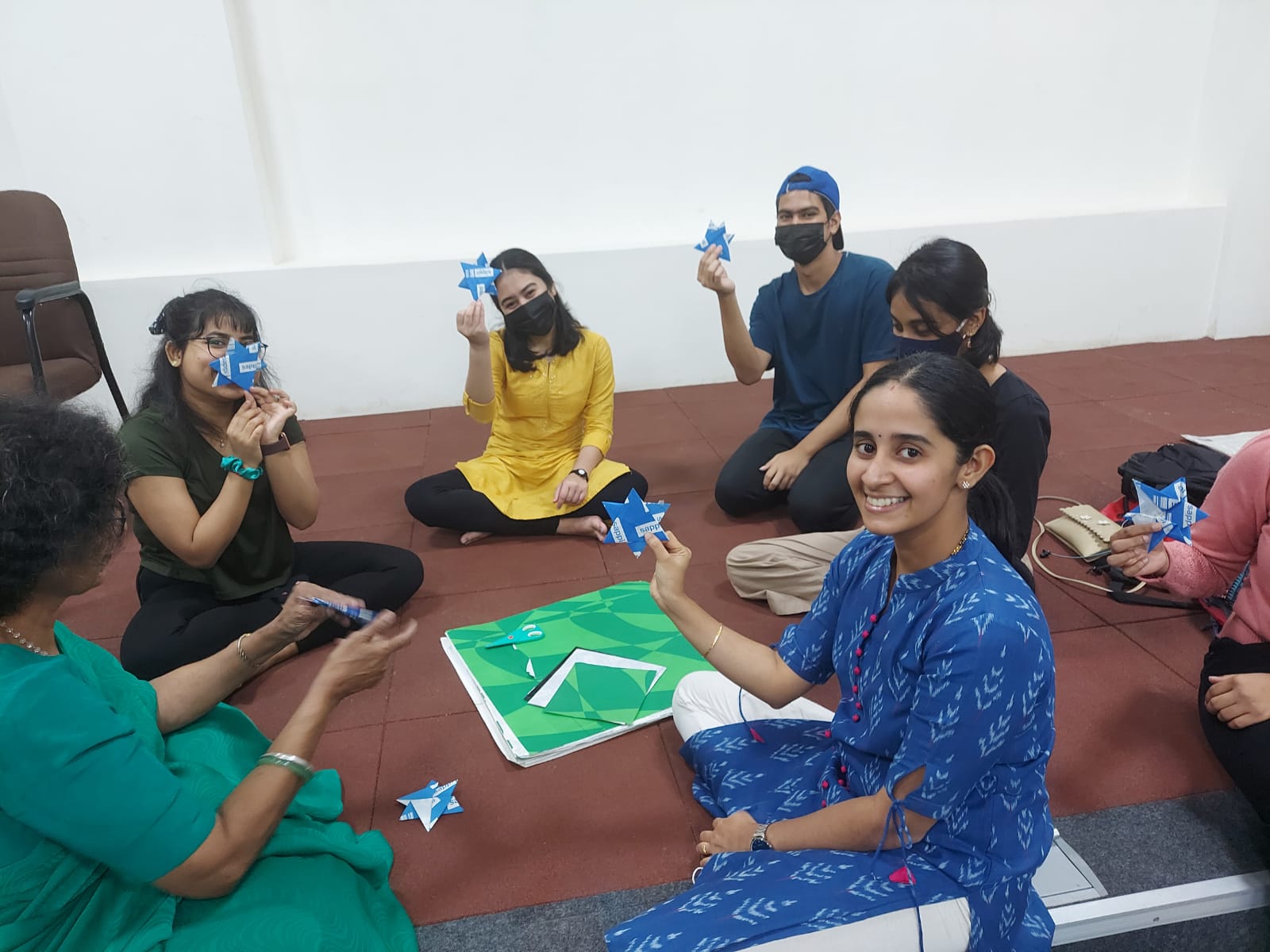 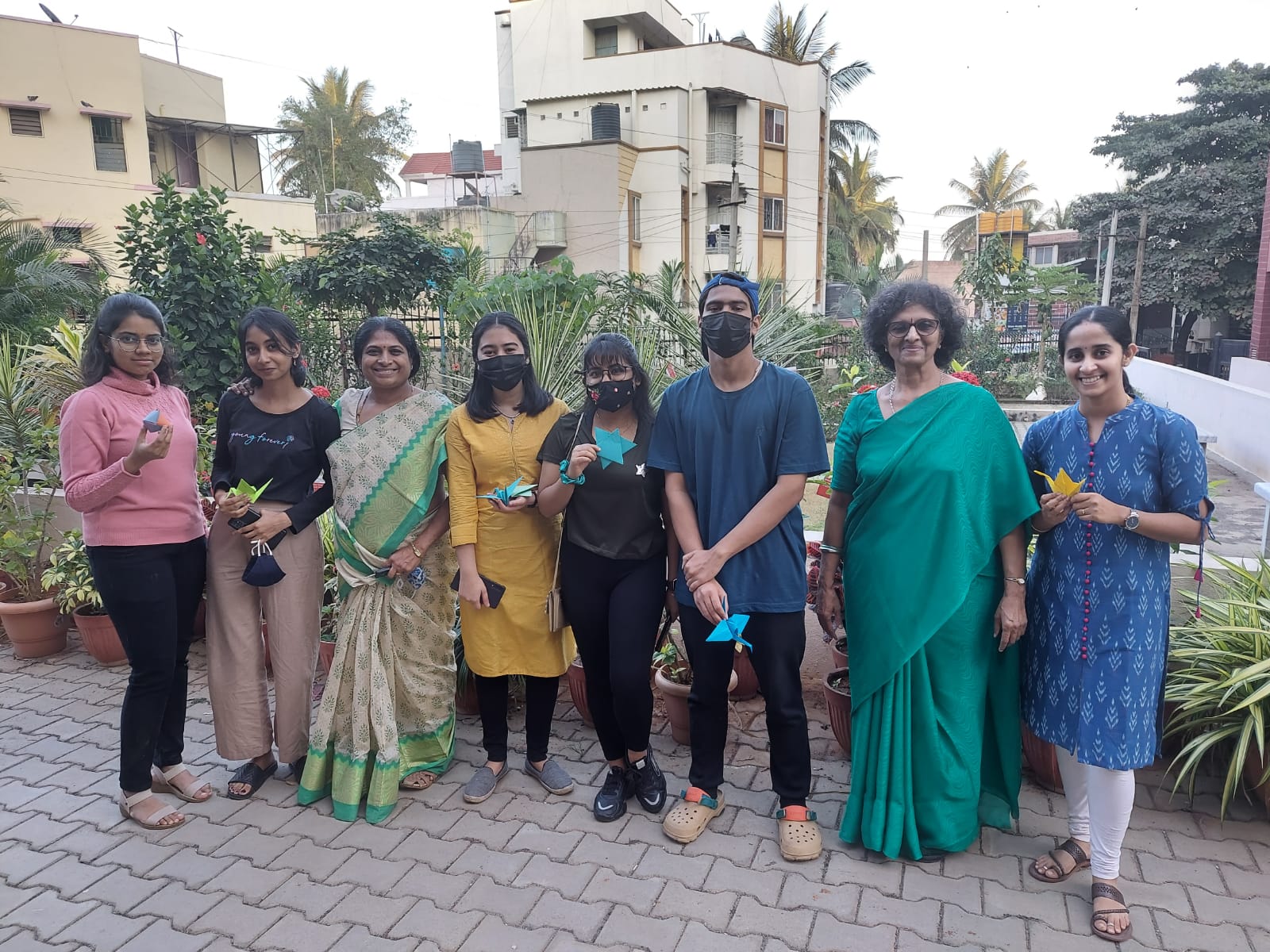 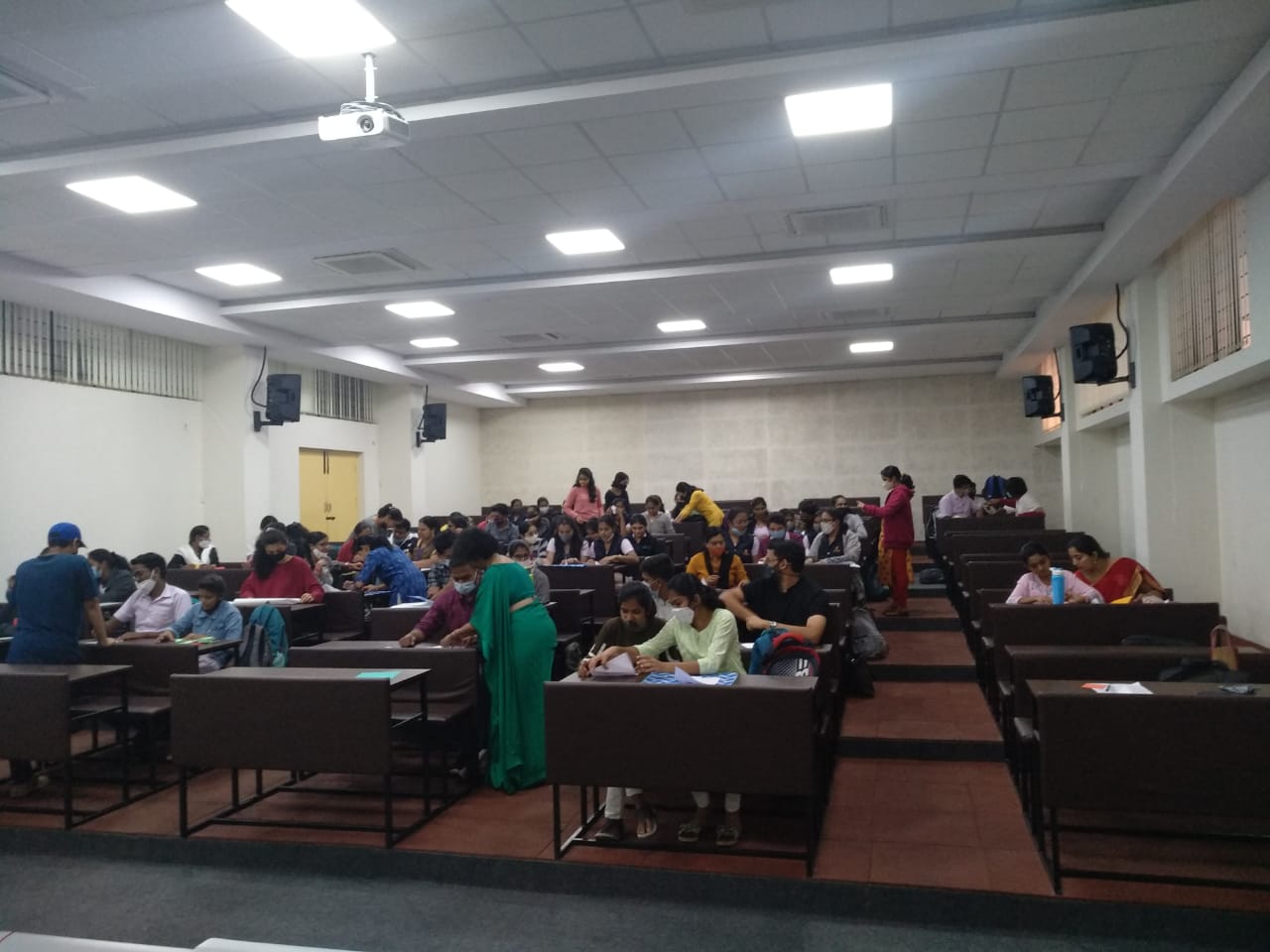 2.      Basic Conversation  and Japanese Management concepts Course of 40 hours for the enrolled students from the Ramaiah Group of Institutions.

The students had an opportunity to work as a  Control room-volunteer for Japanese language Proficiency Test ( JLPT ) conducted by Bangalore Teacher’s Association ( BNK) on 5th Dec 2021 at St. Joseph Institution , Bangalore. The JLPT is the Japanese Language exam conducted worldwide twice in a year by Japan Foundation. Nearly 2250 applicants had applied for the exam in Bangalore. The exam was conducted with strict adherence to COVID protocols. The students had the opportunity to experience Japanese management concepts learnt in the class like Time management, 5S and Kanban. 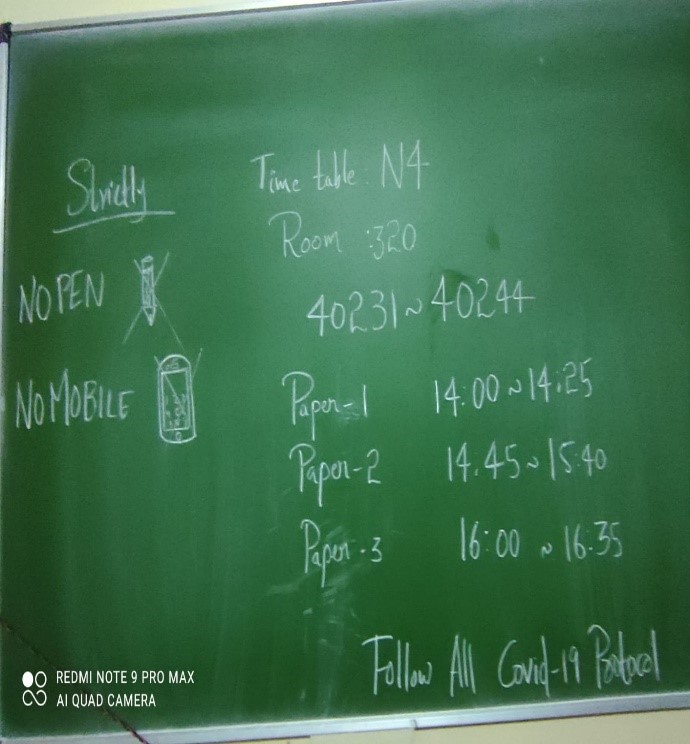 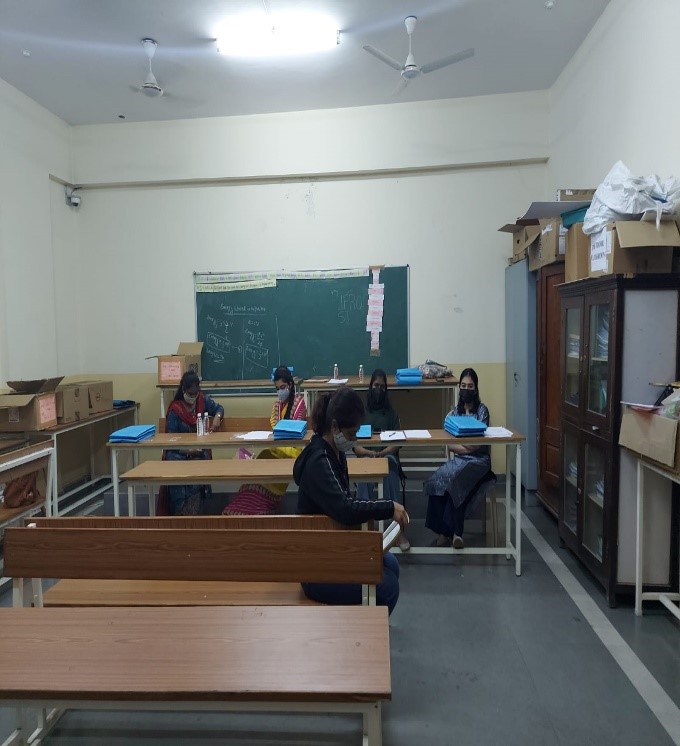 Students at the JLPT Centre 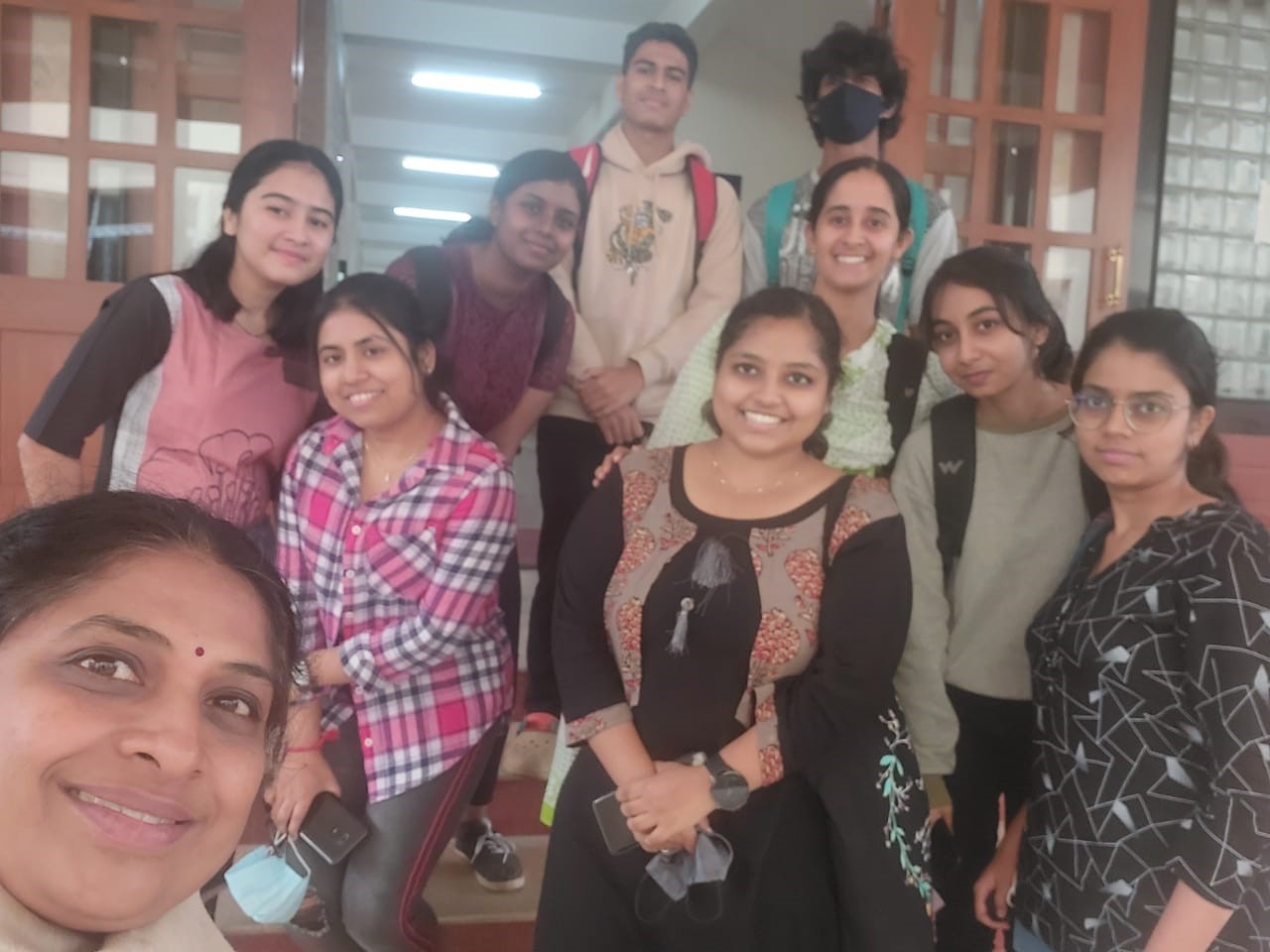 The Ramaiah Japan Centre (RJC) is conducting its 1st Cultural Workshop on Origami. Origami art is the traditional Japanese craft of folding a sheet of paper into objects and figures. Ori translates as “folded,” and kami means “paper.”  Traditional origami consists of folding a single sheet of square paper (often with a colored side) into a sculpture without cutting, gluing, taping, or even marking it. The session is scheduled on 24th December 2021. Mrs. Geetha Bhat will be the resource person for the event. 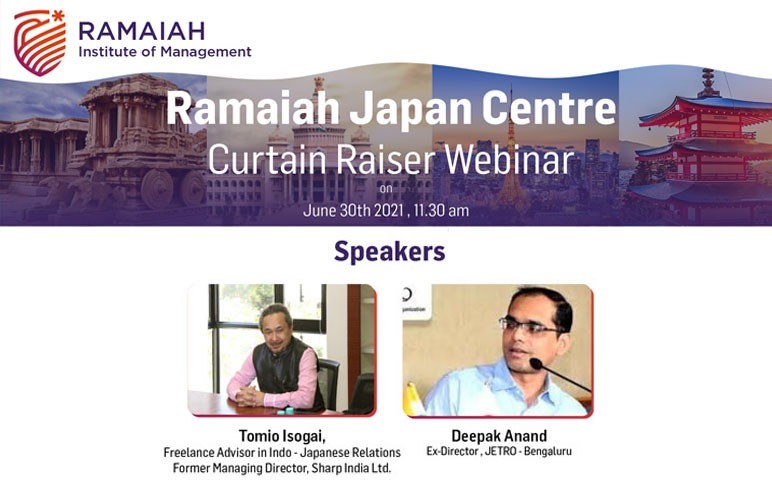 The Ramaiah Japan Centre is established at the Ramaiah Institute of Management (RIM) with the aim of extending global engagements for the Ramaiah Group through collaborative activities with Institutions in Japan and Japanese companies and broaden employment opportunities. The Japan Centre will enable students interested in Japan and JV companies to learn the Japanese language, culture and explore careers in Industry, Research and Higher education.

The Curtain Raiser webinar session held on 30th June, 2021 marked the beginning of this new endeavour. Dr. Manasa Nagabhushanam-Director (Academics, Research & Administration), RIM delivered the welcome address. Chief Executive, GEF-Shri. B.S. Ramaprasad delivered the opening marks. The Chief of Finance of GEF Shri G. Ramachandra graced the occasion with his presence. The eminent speakers for the session were Mr. Tomio Isogai, Freelance Advisor in Indo-Japanese Relations & Former Managing Director, Sharp India Ltd. and Mr. Deepak Anand Ex-Director, JETRO – Bengaluru who provided comprehensive insights on similarities between India and Japan, Japanese mindset, work practices, business etiquettes, opportunities for Indian youth and life in Japan. They highlighted that learning the Japanese language was the ley to leverage more opportunities in Japan. This was followed by a video presentation which was a compilation of experiences from Indians who have learnt Japanese and are working in Japanese companies. Ms. Anjana K.S., the Head of the Ramaiah Japan Centre introduced the Japanese language and course details. This was followed by an interactive Q&A session. The event witnessed an overwhelming participation with around 500 participants. The event concluded with vote of thanks by Prof. Rema V, the emcee for the event.